After 5 years of studying and flying, one of the biggest and hardest steps to become a commercial pilot happened! I managed to land my first job as an airline pilot for a ‘famous’ European airline; in order to validate the contract, I had to pass my type rating on the A320. My training took place in CAE Gatwick for the ground school and Manchester for the 11 simulator sessions; it should last around 6 weeks (3 for ground school and 3 for the simulators) if everything goes according to the plan. For the simulator pilots are paired for the 3 weeks. It is important to get along well in order to do a good job and have a nice synergy.

Unfortunately learning how to fly this big bird has a price. And it’s quite a big amount. But let’s say it’s for the good cause and it may be for the last time.

I’ve heard so many feedbacks about the intensity or difficulty of a type rating (especially the first one) from instructors or freshly qualified pilots. They all agree on one thing: IT IS HARD AND EXHAUSTING. And yes, I confirm it is!

The first day we have to report at 9am, in a ‘friendly casual’ outfit. We met our ground instructor, the one that is in charge to teach us all of the a320 systems; basically, how this aircraft works. Every time I was about to meet a new instructor, I was always hoping to get a good one. You want to be taught the right way in the first place! I was quite happy with the first feeling. Obviously, he was a former pilot, flew on multiple aircraft such as B737, A320 and more. What I liked about this instructor was when he said: “I was bad at school, I wasn’t a genius and I don’t expect you to be. The way I teach is like if I had to explain really complicated stuff to children. So I’ll treat you as children for the next 3 weeks!”

I really loved the idea. First because I’m no genius and also I often ask a ton of questions, I may need drawings or to explain deeper in order to my brain to get the idea… And remember, there is NO silly question.

The way we learn about the aircraft is called CBT; it means Computer Based Training. We have every lessons on a website, with a synthetic voice illustrated with pictures, diagram etc. The first 2 days we did our CBT during the whole day. Then we had to follow our schedule and do the CBT for the following day as the instructor would do a recap and explain into more details or some areas that we didn’t understand.

The first three days were so intense, I think it was one of the most difficult part of the training; there was just too much information to acquire and understand. And we have to follow the pace otherwise we will be late on schedule but moreover you will not be ready for the theoretical test which was scheduled 2.5 weeks after the 1st day.

To give you an idea of my regular day, we started at 9am, quick break of 30min to max 1h at 13pm. Then back to studying until 7pm. The school is open 24/7 so if you work better from school you are free to stay and work there or you can go back home. Personally, I prefer working at home. I was living 7 minutes away from the school. As soon as I arrived home, I took my time to get a good shower so my brain can cool down, relax and feel ready to continue afterwards. Then back to study until midnight or quarter past midnight with a 30 minutes break to eat. Rest is really important in order to be efficient and perform well! I think that management of sleep plays a big part in a type rating! Pay attention to your sleep pattern. 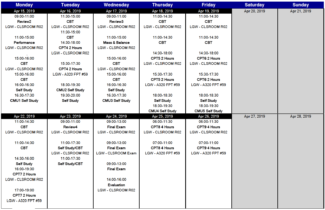 Here is my schedule for 2 weeks of ground school

Ground school is all about systems such as, electric, hydraulic, flight controls, power plant (engine) etc. A lot of the ATPL comes back during ground school! (ATPL, Airline Transport Pilot Licence, is an enormous theoretical exam for pilot that want to become professional pilot).

While learning the systems through the CBTs we had to learn how to operate the Airbus a320 before going for the real full flight simulator; 9 sessions of FPT (Flat Panel Trainer) were scheduled. It’s an electrical mock-up of the cockpit with tactile screen to operate every switch; only the thrust levers were “real”. 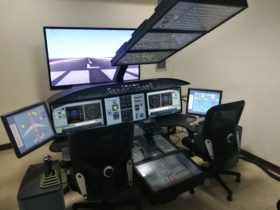 Our mock-up was exactly the same as the picture except that we didn’t have the side stick neither the TV screen in front of us.

We operate the FPT and the simulator as a real commercial flight thus with 2 pilots.
In a real commercial flight, there are 2 pilots (depending on the duration of the flight). A Captain and a First Officer (me). Most of the people get confused about who does what and generally think that the Captain does everything and the co-pilot is here as a relief pilot. It’s WRONG. We use the term pilot flying (PF) and pilot monitoring (PM). Each pilot has specific tasks and procedures to apply. The PF will be operating the controls thus flying the aircraft. The PM will assist the PF and monitor that the flight takes place safely. He will as well operate the radio and be in charge of cross-checking fuel figures with our flight plan. Then once the flight is completed, pilots will swap roles. That’s the Captain decision to manage who does what and when. The difference between Captain and First officer is the authority; the Captain has the full authority onboard. He’s the one who has the final say word in the decision making. Of course, the Captain has more experience than the First Officer.

We use the FPT as a mean to learn and apply the SOPs (Standard Operational Procedures), checklists etc. As the simulator is really expensive and each sim session has a busy and complex schedule, we have to be ready and know every procedure to maximize the 4 hours session. We can’t afford to lose time while learning how to set up the computers and getting familiarised with every cockpit switch or procedure. We have to be ready and prepared for each simulator.

We were able to back seat our colleagues while they were doing their FPT so we could learn from their session as well.

Up to the 5th first FPT we didn’t take off. It was all about setting up the aircraft; cockpit preparation, set up the FMGS (Flight Management Guidance System); that’s a very powerful computer of the aircraft where we load a lot information such as our flight plan, fuel, weight and much more. We then practice our standard calls out. Only at the 5th FPT session we took off! Remember it is not a simulator, so we do not have any control, we just set up the aircraft and when ready it takes off automatically. Once in the ‘air’ we continue to learn our procedures and practice our flows. We then started to do some approaches. There are different types of approaches such as 2D or 3D (the difference is the guidance lateral and/or vertical).

The 2 last sessions were kind of a ‘test’ where the instructor will say yes or no you can continue to the real full flight simulator; if you can’t continue to the next stage, they will schedule more FPT (and it’s pricey). At this stage we are supposed to be able to operate the aircraft on a basic level; it means knowing our SOP, our calls out, know how to prepare and set up the cockpit, know how to do a brief and do an approach to land for every kind approach procedures.

My last FPT went really well, I was happy with it so I could move on to the next phase: full flight simulator in Manchester!